The aircraft management page enables you to gather all your aircraft (purchased, leased and cargo aircraft) to have an overview of your fleet. If your aircraft is a lease or a cargo, a label appears on the left of the aircraft’s name as an indication.

Once you have unlocked the cargo research in your Research Center (General R&D). You can use most of your current aircraft to carry goods and also purchase aircraft specially designed for freight. You can acquire these aircraft in the Cargo R&D.

These aircraft are characterized by the Cargo label and cannot transport passengers.

Your leased aircraft are listed in a specific section that enables you to manage their contracts. To access this section, click on Aircraft management > Lease agreements. This list provides some information and actions to perform on the contract:

The red cross displayed next to each aircraft enables you to end the contract immediately. In this case, you will be refunded the security deposit but not the days you paid in advance. You can estimate the number of “lost” days by looking at the number of remaining days before the next debit.

The aircraft details page provides many very useful information about the management of the aircraft:

The characteristics of an aircraft define its abilities:

General information of the aircraft provide more details about your purchase and its profitability: 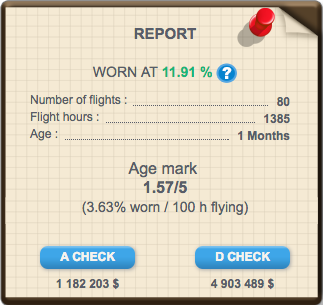 Changing the hub of my aircraft

You can reassign your aircraft elsewhere if you own another hub, otherwise this action is not possible.

You will find a button to reassign your aircraft to another hub directly: