The Gazette is a newspaper that relays events related to aviation or international news. Make the right choice for your airline and unlock rewards!

The Gazette is available to players who have been playing the game for at least 10 days.

Each gazette is composed of an event title and a series of choices, each of which corresponds to a bonus. As long as the Gazette is available, you can select and confirm one of these choices to get the associated bonus. 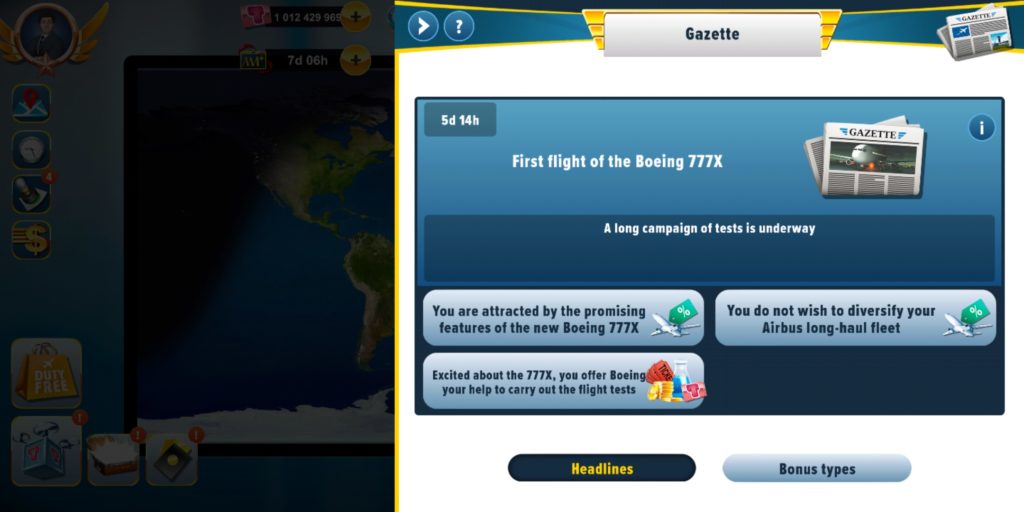 There are two types of bonuses:

Once you have selected and confirmed your choice, the bonus obtained is indicated instead of the available choices.

Once confirmed, your choice cannot be cancelled. 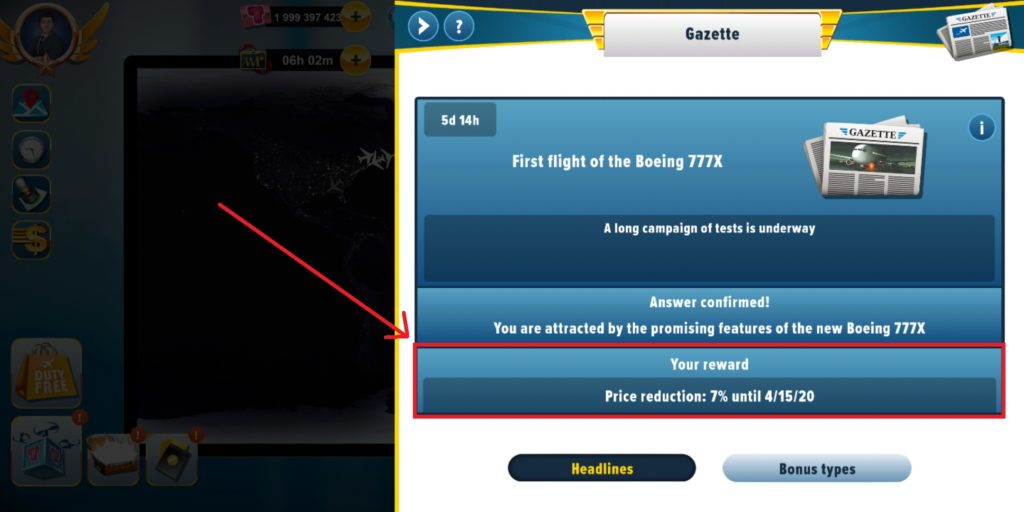 You can also view current bonuses by pressing the Bonus types button. 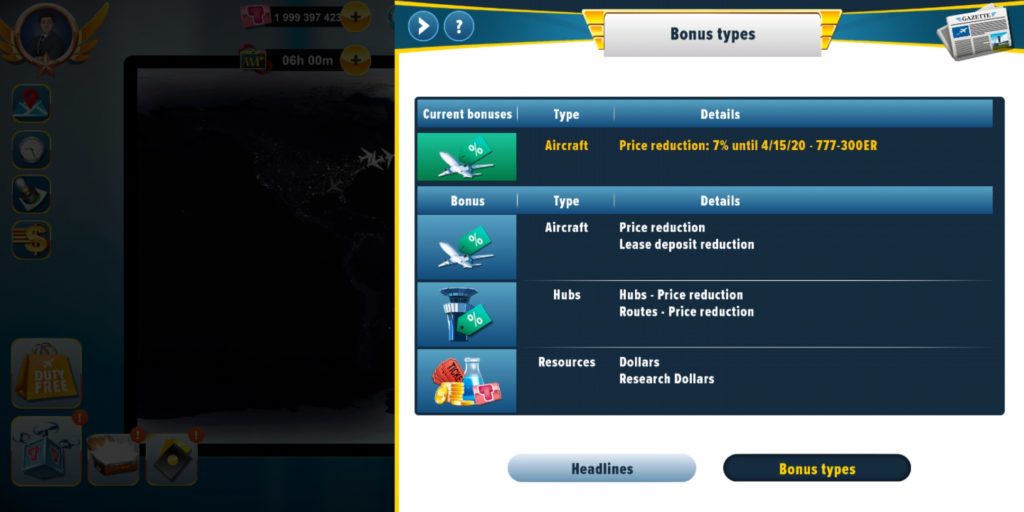 In addition, this tab contains all bonuses that may be offered by the Gazette.

It is best to select a choice in accordance with your strategy. For example, getting a discount on a long-haul aircraft will not be useful if your strategy is entirely focused on short-haul.

Finally, the Gazette’s main objective is to inform players! When the Gazette comes with an article, all you have to do is press the button to access it. 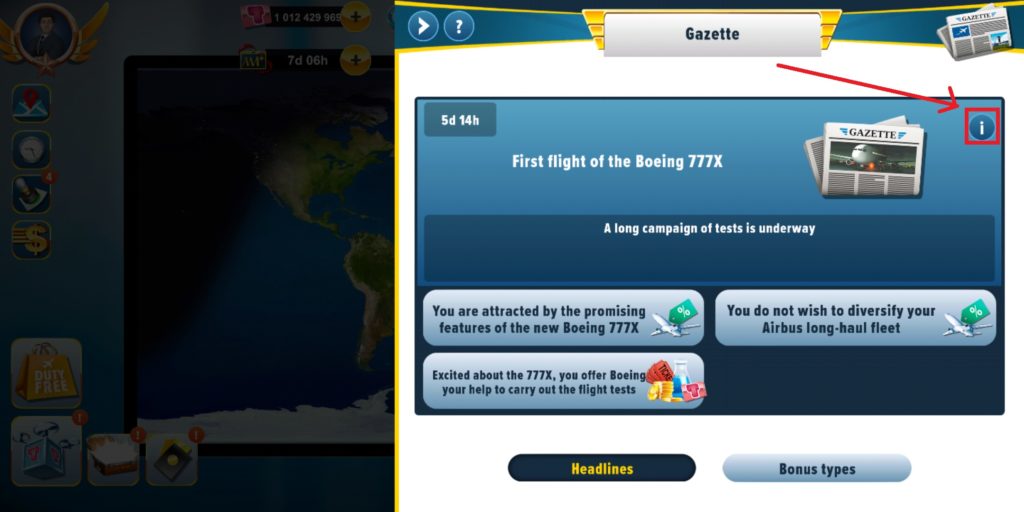 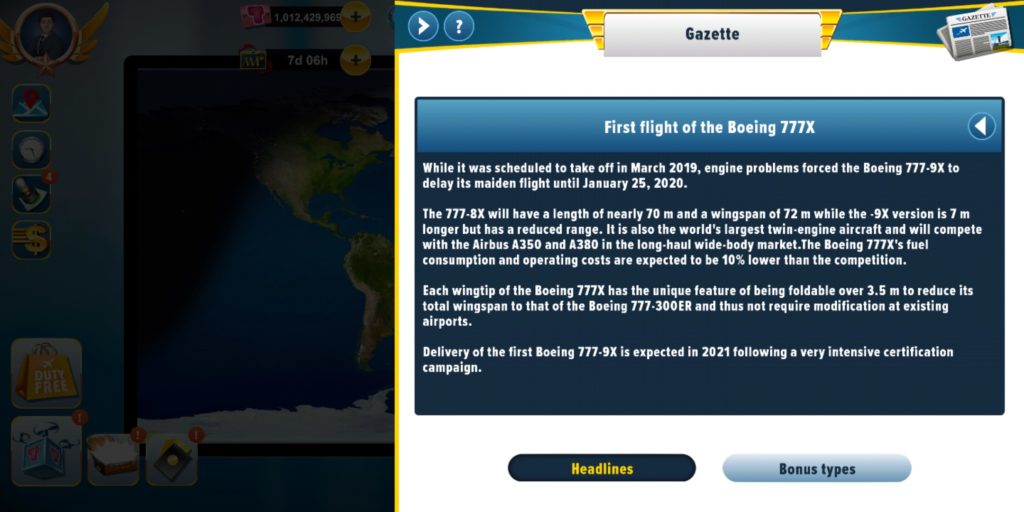 The Gazette, a volunteer newspaper

The Gazette events are based on real facts and are written by a team of passionate Airlines Manager journalist-players.

These players who make up the Gazette team take care to do the research necessary to report the news from the world of aviation in a realistic and entertaining way.

Gazettes are written under the secrecy of the journalist-players’ team while bonuses are defined by the Playrion team. These bonuses are therefore unknown until the publication of the gazette.

The Playrion team would like to take this opportunity to thank all the players who have contributed to the Gazette since its creation.

How to join the Gazette team?

The Gazette team is always open to applications from passionate players who want to make a contribution.

To submit an article, it is advisable to be fluent in French or English so that the content can be accepted by the Gazette team and the Playrion team.

If you are motivated to join our journalist-players, you can send your application to the Gazette’s mailbox (in French, but also in English soon). You will be contacted as soon as possible!